Our 2018 exhibition “Dew of Heaven: objects of Ritual Magic” is now open and will be in the Museum until October 31st.  The exhibition looks at ritual magic through objects in the Museum’s collection.  It does not claim to be nor can it hope to be a comprehensive exploration of this huge theme.  We have focused on objects we have which has given the exhibition a distinct emphasis on Aleister Crowley.

A guidebook on this exhibition can be bought from our online shop for £3: https://museumofwitchcraftandmagic.co.uk/shop/dew-of-heaven-objects-of-ritual-magic/ 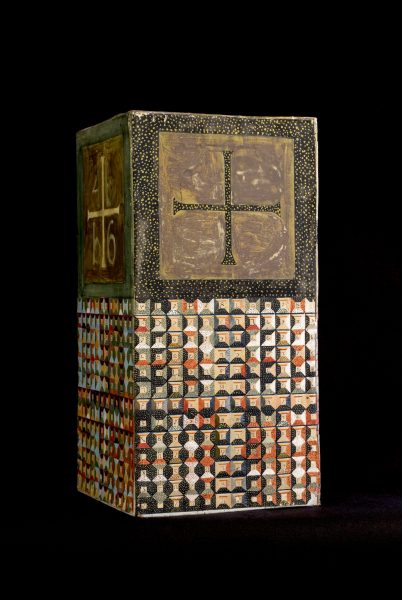 Above: this cubic altar appears in the exhibition.  It was made by Steffi Grant for the Museum according to instructions laid down by Aleister Crowley in Book 4, Part 2.  It includes the watchtowers and the Enochian language, both of which are derived from the sixteenth century writings of John Dee.

An overview of the exhibition sections:

An introduction to Dew of Heaven: the title is derived from John Dee’s Monas Hieroglyphica (pictured below).  We also used the image of the sun and moon with dew emanating from them and being caught in the design of the exhibition (in the columns). This first section explores the idea of dew as a substance connecting heaven/the heavens and earth in the way that ritual magicians aspire to do.  It also looks at the alchemical and folk magic uses of dew and the possible connections between different magical practices and ritual magical ones. 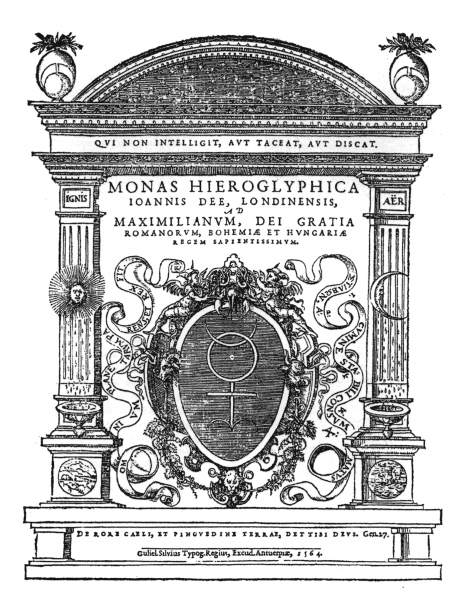 As it is above, so it is below: an introduction to Hermes Trismegustus, Thoth and the hexagram.  This section includes a slate altar made and used by Alex Sanders, one of the most famous twentieth century witches.

The world in harmony or the magic of the three realms: elemental, celestial and supercelestial magic which includes a reproductions of this image by Robert Fludd. 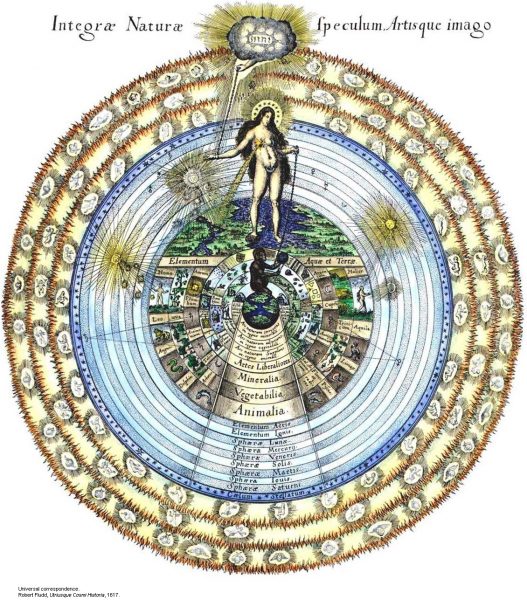 The Rosicrucians: an enigmatic group with connections to alchemy, the Masons and John Dee.  This section includes Alpha and Omega items similar to those which inspired Doreen Valiente. 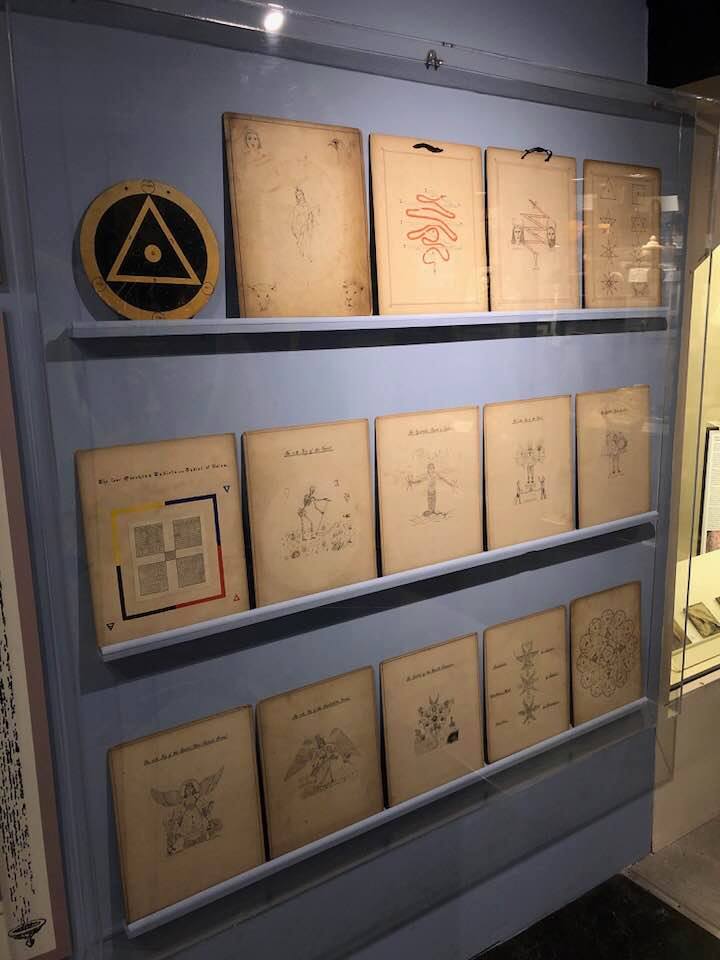 Eliphas Levi and Baphomet: an exploration of this mysterious image described by Levi as a hieroglyph.  This section includes the colourful image of Baphomet below which has been in the Museum for decades. 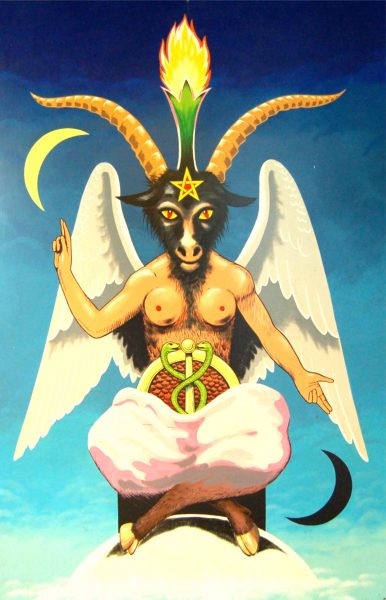 John Dee and scrying: crystals and their use for scrying/astral projection, the Enochian system, the Seal of God and Enochian tablets for scrying as created by Steffi Grant according to the Golden Dawn system. 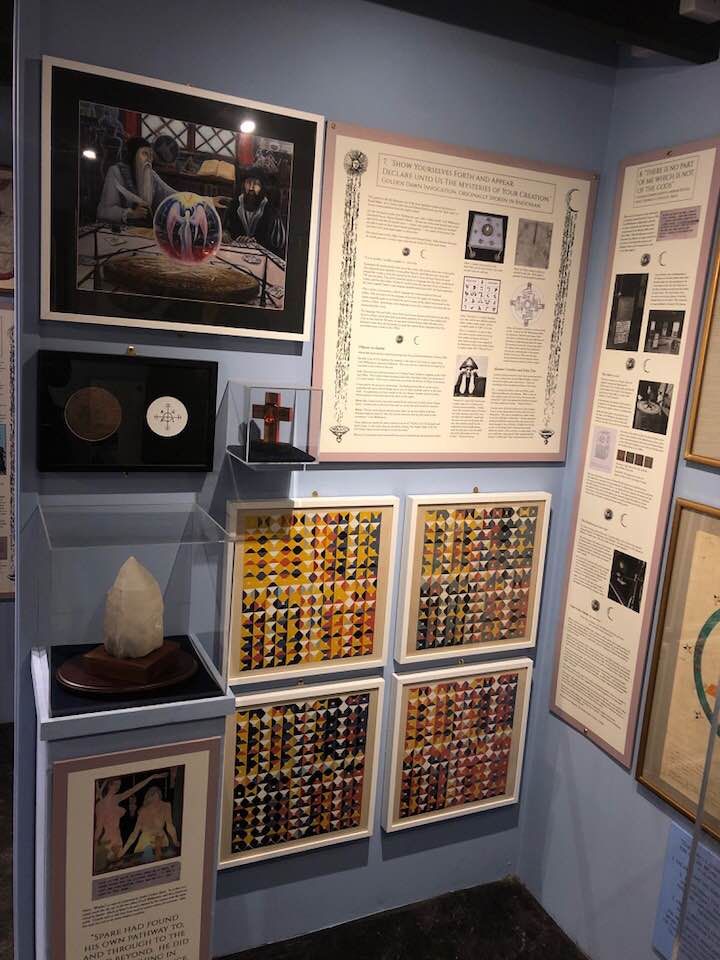 The Temple, the Circle, the Altar, the Vault of the Adepts:  An old Museum display designed by Steffi Grant according to Aleister Crowley’s instructions/designs. 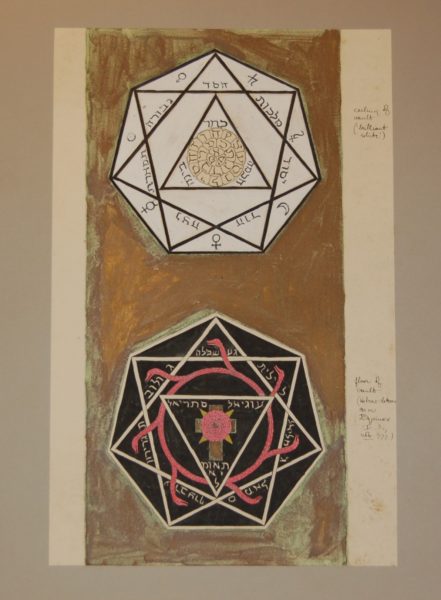 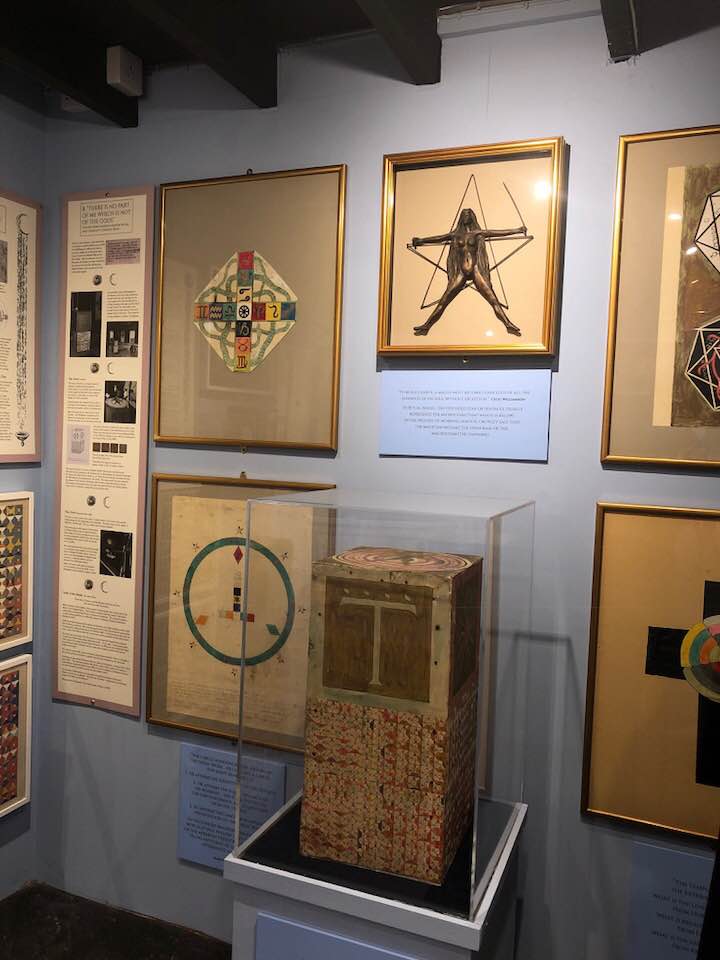 Aleister Crowley and Ritual Magic: including robes from members of the OTO and AA (magical orders associated with Crowley), his chalice and wand and pictures done by Steffi Grant for Museum displays using Crowley’s designs and instructions. 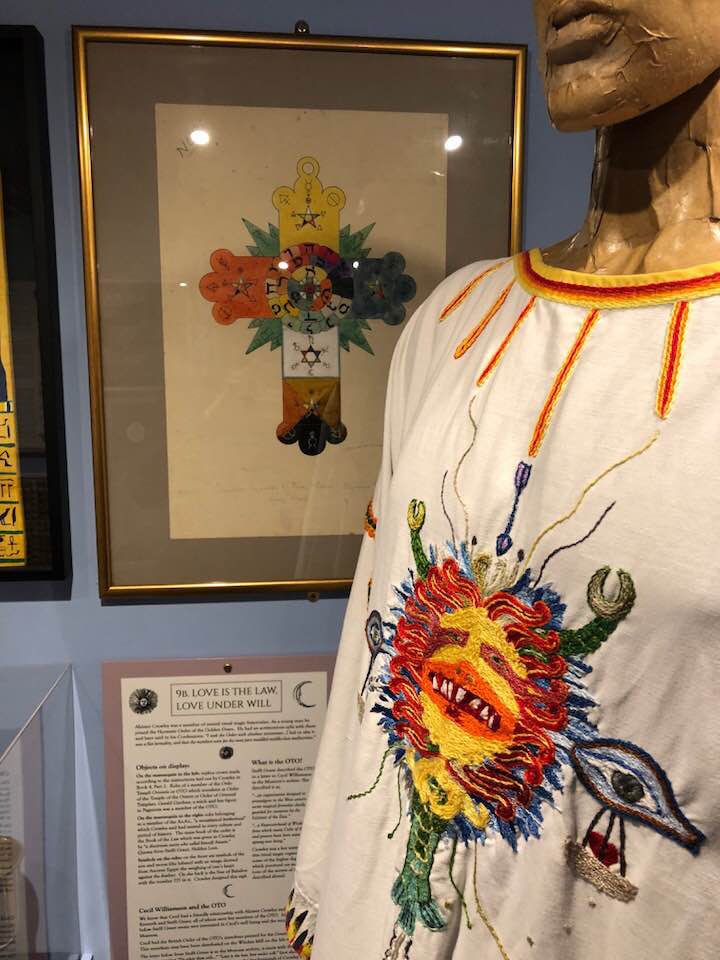 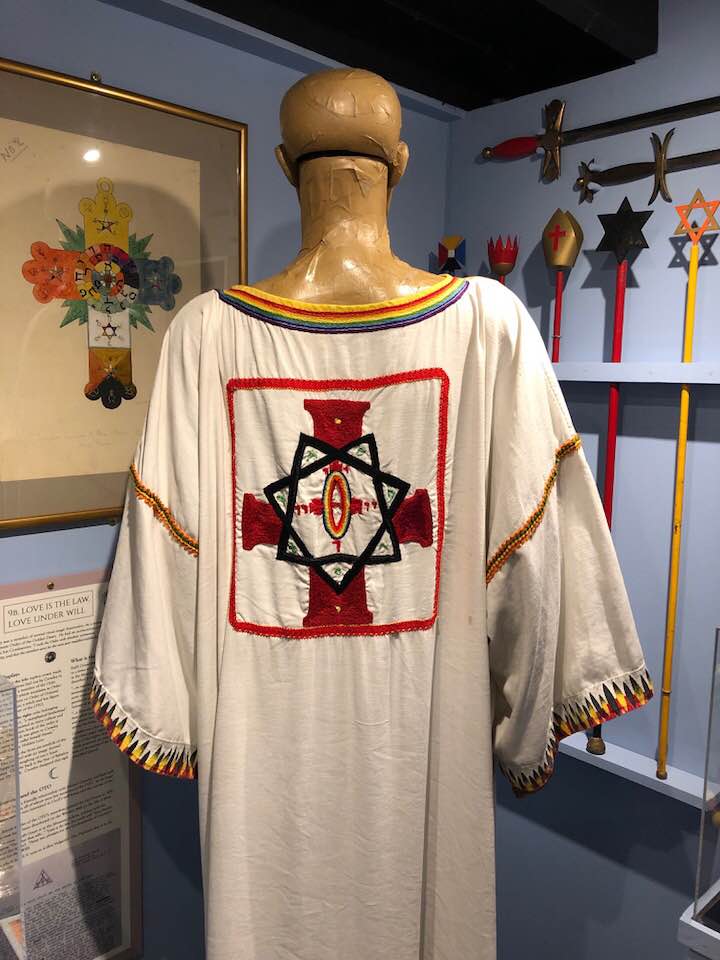 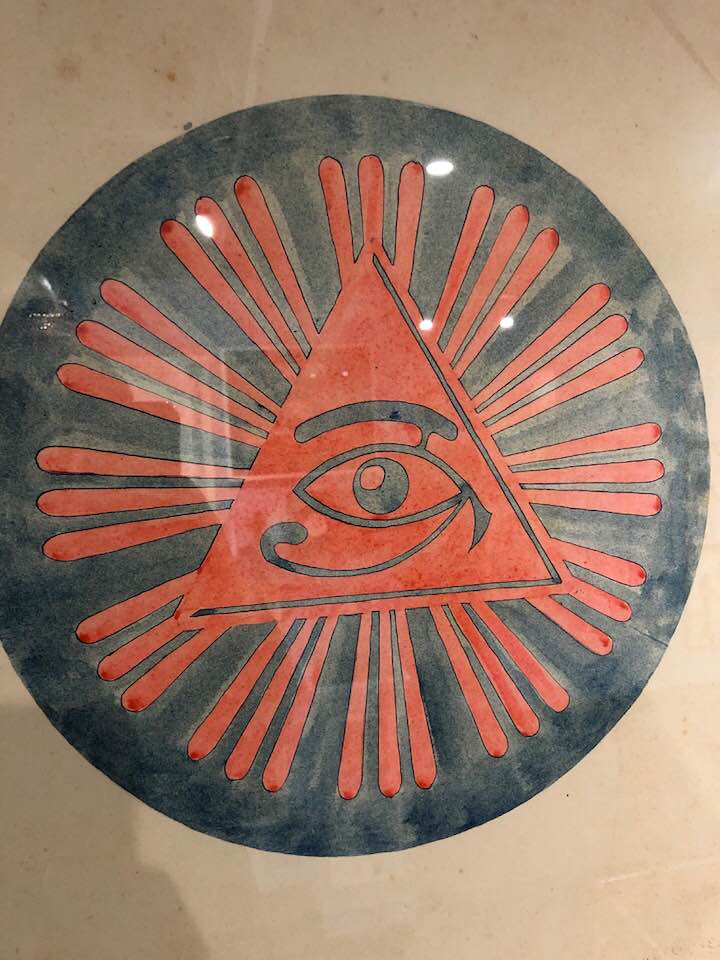 The Hermetic Order of the Golden Dawn: wands/sceptres, elemental weapons, crux ansata, cross and triangle, the complete Rose Cross, pentacle and hexagram and a wand made by a local witch based on Golden Dawn designs. 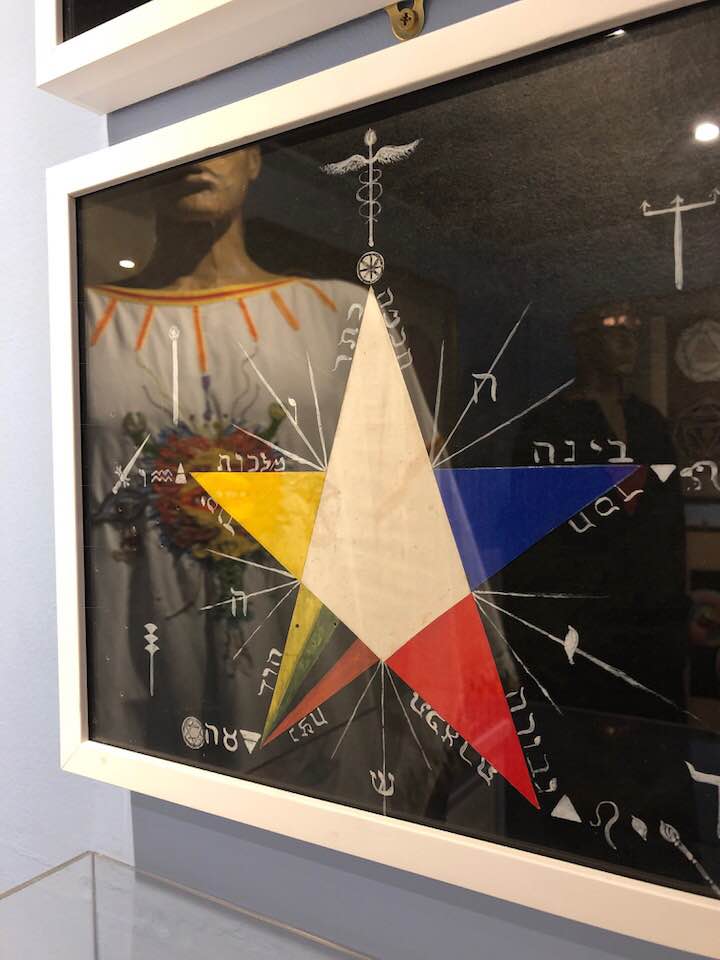 Cecil Williamson (the founder of the Museum and Ritual Magic): what was his attitude to ritual magic?  What were his connections with Crowley and his circle?

Above: Cecil Williamson using the altar in the 1950s.

We are hosting a conference to coincide with and augment the exhibition on May 12th-13th (sold out, sorry).  A guidebook will be available soon.

Photos below of the exhibition while under development (thanks to Carol Keith for these). 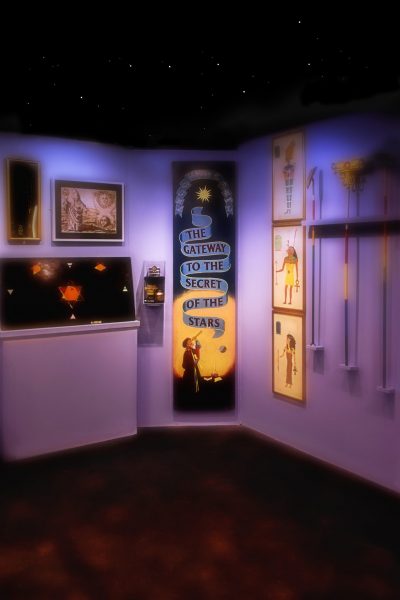 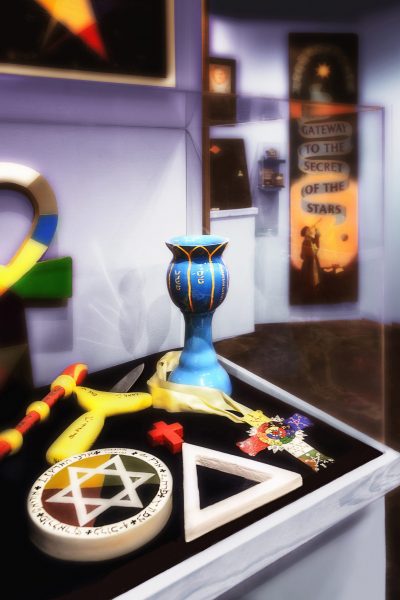